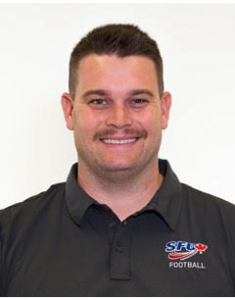 For a California native, James Holan is well-schooled on Oregon high school football.

He first got acquainted with it during his playing days at Linfield College, where he was a starting guard on the 2004 national championship team. And as an assistant at Simon Fraser University in British Columbia the last two seasons, he recruited Oregon players.

Holan played in a struggling high school program at Tamalpais (Calif.) in the Bay Area before being immersed in Linfield’s winning culture, which shaped much of his coaching philosophy.

“Going from a brutal situation in high school to Linfield, it was really eye-opening for me,” he said. “My biggest goal has always been to give kids a way better experience than I had in high school. That they would have a coach that was involved, a coach that cared, you know, somebody that was holding them accountable.”

“We had a tremendous run, for that school, especially,” Holan said. “They were always kind of a middle-of-the-road team, and we were able to get the culture going in the right direction.”

Holan moved to Simon Fraser in 2018 when Thomas Ford, a former Linfield teammate, was hired as the head coach and offered him a spot on the staff. Holan was the offensive coordinator for two seasons.

With Holan and his wife, Ashlee, expecting their first child this month, he sought a return to high school coaching. And with their ties to Oregon – Ashlee is from California but went to the University of Oregon and has relatives in the Portland area – he began to pursue job openings in the state.

“The decision to come back down to high school was a lot about family for me,” Holan said. “I can’t see myself having the newborn and being on the road for eight, nine weeks during the offseason. It was a big family decision.”

No Events This Week

Events are added by athletic staff.
View All Events