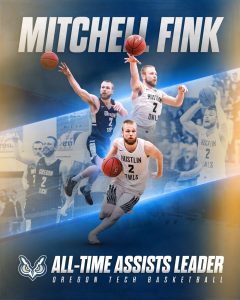 Mitchell Fink has become Oregon Tech’s All-Time leader in Assists.  He is at 798 and counting.  Congrats to the former Cavalier. 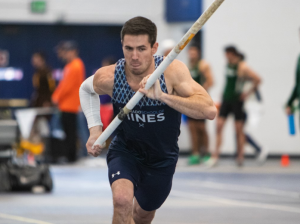 USTFCCCA National Athletes of the Week

With the announcement, Connor McLean becomes the first Oredigger to ever win USTFCCCA National Athlete of the Week during the indoor season. He garnered the honor thanks to the sixth-best heptathlon score in NCAA Division II history. McLean’s mark of 5,591 also broke his own program record by 233 points and currently ranks #1 across all divisions of collegiate track & field. The Oregon native finished first in a field of 21 competitors that featured athletes from NCAA Division I Colorado and Colorado State. He bolstered his score with a clearance of 5.10 meters (16-8.75) in the pole vault, which also ranks #1 in NCAA Division II. McLean’s heptathlon score is an automatic qualifying mark for the 2019 NCAA Division II Indoor Track & Field Championships in March. His pole vault height serves as a provisional qualifying mark.

As a program, Mines’ men and women tout 17 qualifying marks and times on the NCAA Division II performance lists. Four of those marks and times rank #1 in Division II including both of McLean’s performances, as well as Vincent Workman in the mile and the men’s distance-medley relay. Additionally, the Oredigger women had a record-breaking performance of their own at the Mines Alumni Classic & Multi courtesy of Hannah Miller clearing 3.81 meters (12-6.0) in the pole vault.

Mines’ men and women now take two months to rest and train before returning to competition on Jan. 31 and Feb. 1 with action at the Mines Winter Classic & Multi and the Colorado Invitational. Additional information and live results for both events will be available at www.minesathletics.com. 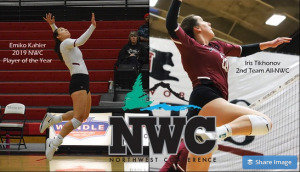 Northwest Conference Player of the Year Emiko Kahler and the Whitworth Pirates will head to the Atlanta Regional of the 2019 NCAA Division III Volleyball Tournament.

Callie Wilkins(Clackamas High School graduate)–a sophomore volleyball player at Concordia had a career-high 34 digs vs Dominguez Hills this past weekend.  Congratulations to Callie. 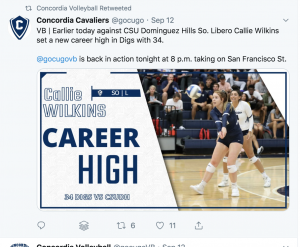 It was a busy weekend for former Clackamas High School track athletes. Monnie Spears-Rogers won the conference 100m and 200m. Monnie heads to the national outdoor NCCAA championships in a few weeks. Monnie is the national indoor 100m and 200m winner. Article. Brooklyn James is ranked in the top 20 in the Pac-12 in the 400m. Brooklyn ran 55.81a. She will be at Lewis and Clark University this coming Friday to run the 800m. Article. Suzanne Stafford was apart of the 5th place finishing rowing team at the WIRA Championships. Article.