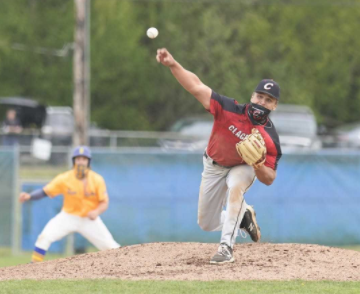 The Cavaliers get some payback as Kadin Miller drives in three runs and Jackson Jaha tosses a complete game.
April 23, 2021, by Jerry Ulmer, OSAAtoday

So after opening the season with a nine-inning home loss to conference rival Barlow, the Cavaliers were counting the days until Friday’s rematch on the Bruins’ field.

“I was literally looking forward to this day since that last pitch,” Clackamas senior shortstop Kadin Miller said. “I circled this day on the calendar.”

Clackamas made it count, scoring three runs in the first inning and coasting to a 6-1 win over the previously unbeaten Bruins (5-1). It was the fifth consecutive win for the Cavaliers (5-1) and ended a three-game losing streak to Barlow, which handed them their only two Mt. Hood losses in 2019 as well as the 2-1 defeat on April 13.

“We had a little extra chip on our shoulder today,” Clackamas senior pitcher Jackson Jaha said. “We were feeling kind of like a league championship type thing here. We definitely felt a little more anticipation for this one. I’m just excited that we won.”

Miller drove in three runs with two singles and Jaha earned the complete-game victory, scattering six hits, striking out six and walking two. The win was redemption for Clackamas, which doesn’t have another game scheduled against Barlow this season.

“That first game, we kind of felt like we beat ourselves,” Cavaliers coach John Arntson said. “So I know these guys came in motivated and fired up. Barlow’s a good team. They scrap, they’re competitive as heck.”

Barlow pitched senior left-hander Cole Peterson, who earned the win in the first meeting by throwing the last four innings. The Cavaliers got to Peterson early, though, getting an RBI single from junior Nick Holm and a two-run single from Miller in the first inning.

“That pitcher, they threw him the last game, and he shoved it,” Miller said of Peterson. “But we already saw him once. I think their mistake was throwing him again. We’ve been prepping for that.”

The early outburst was more than enough for the hard-throwing Jaha, who has committed to Oregon as an infielder. Jaha gave up only an RBI triple to senior Titus Dumitru in the fourth inning.

“I felt pretty good,” Jaha said. “My catcher, Trevor Wilson, was incredible. Without him, I don’t think I would’ve pitched that good. I threw pretty well. My slider was really good today. I was just hitting my spots really well.”

“He wanted the ball really bad for this game,” Arntson said of Jaha, who threw the first six innings of the season-opening loss. “There were a couple times when he got in trouble, and he had the mental capacity to gather himself and get his composure, and get back to just going pitch to pitch instead of letting little things bother him that maybe would’ve happened in the past. He’s grown up a lot as a pitcher.”

Clackamas finished with 10 hits off Peterson, who went the distance for Barlow. Miller hit an RBI single in the fifth to make it 4-0 and the Cavaliers added two runs in the sixth on a wild pitch and errant pickoff throw.

Miller, who has signed with Centralia Community College, had a big day all-around.

“He played a heck of a shortstop, and boy, he was dialed in at the plate,” Arntson said. “He was squaring balls up. That was fun to see him do that.”

Barlow coach Scott Hunter lamented his team’s missed opportunities. The Bruins left seven runners on base, five of them in scoring position. They had the bases loaded with two outs in the third inning but Jaha got senior Cameron Williams to pop up to Miller at shortstop.

“We had our chances,” Hunter said. “In those types of games against a quality team like that, you’ve got to score. We saw him before, so we knew what to expect. It was just not getting the key hit at the right time.”

Barlow senior catcher Wilson Weber, who has signed with Oregon State, went 3 for 4 with three sharp singles. Hunter marveled at the ability of Weber.

“I don’t know what to say about Wilson anymore because he still surprises me every day,” Hunter said. “To see the progression in four years has been amazing.

“I sometimes get lost in the game, just looking back there and seeing him catch, and thinking to myself, ‘It’s only a few more games and he’s not going to be there anymore.’ He’s a special talent, and he’s going to go far in baseball.”

Clackamas, which won the 6A title in 2017 and was runner-up in 2018, appears to have the ingredients of another state contender. Entering Friday’s game, the Cavaliers were hitting .353 and had an ERA of 1.09. They have outscored opponents 56-10.

“If we would’ve had a real season, with real playoffs, I think this team would be right there with the best teams in the state,” Jaha said.

Added Miller: “I think we’re the best team in the state.”

With no state playoffs, Clackamas is hoping to match up against some of the better teams in the metro area during the culminating week. There has been talk of a round-robin type event, but nothing set in stone.

“It sounds like we’re going to do something where we get to play some of the other teams that are higher seeds in their leagues,” Arntson said. “We kind of look at that maybe as a playoff, and we’ll just see what we can do.”